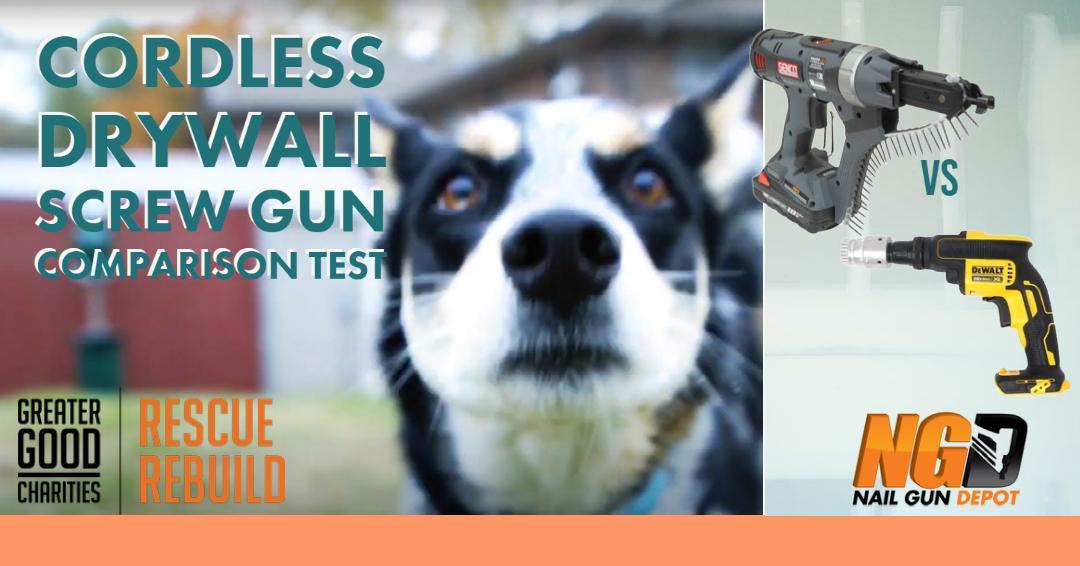 Nail Gun Depot partners with Rescue Rebuild, part of @Greater Good Charities testing two of the industry's leading cordless, collated screw guns, the Senco DuraSpin and Simpson Strong-Tie's Quik Drive system. Watch the team put each auto-feed screw system through the paces, showcasing each tool's strengths - and weaknesses. Once you see the benefits of using a collated screw gun, you'll never want to use bulk screws again. See which screw system reigns supreme - and enjoy some cute puppies - when you click to watch.

We have a tool review in partnership with Rescue Rebuild, part of Greater Good Charities.

Zach Baker, the Program Director of Rescue Rebuild, and his team set up shop in Missouri at a domestic violence shelter, to create a pet-friendly space so that victims of domestic violence can bring their dogs and cats with them.

The Rescue Rebuild team tested out the Senco DuraSpin DS225-18V and the Simpson Strong-Tie Quik Drive ProDW (updated with the DeWalt DCF624M2G2). Having never used a collated screw gun before this project, Zach says “having one for drywall seems like it’s going to be really handy,” as they aren’t professional drywallers. Their team has always installed drywall with just a handful of screws and an impact driver or a drill.

The crew got to work installing drywall in the space using both the Senco and Quik Drive, when Zach and Matt, one of the fastest on the team with installing screws by hand, attempt a fun trial with a side-by-side comparison of the Senco DuraSpin DS225 versus an Impact Driver.

Typically, if you’re using a loose screw, it is very easy to crack the edge of the drywall. Initial thoughts indicated it was going to be a disadvantage with these screw systems, but what the Rescue Rebuild team found was that you can get a lot closer to the edge with one of these screw guns, and not crack the drywall. When they ran one screw close to the edge with the impact driver, another with the Quik Drive system, and finally the Senco, they found the impact driver cracked the edge of the drywall the worst.

After hanging 18 sheets of drywall and getting a pretty good feel for the screw guns, there were some clear winning features on both systems.

For Senco, the adjustment, which they ran at a 1 ¼” the whole time, came in handy for the few times they had a jam or something got stuck. Each jam was admittedly an operator error, where Zach would push the screws in halfway, push again, and create a blockage. But, the great thing is you can simply adjust the dial to a longer length screw and remove the entire strip. In turn, they didn’t experience any jams that couldn't be cleared quickly on the DuraSpin system.

Another great feature on the Senco model: when it’s time to change your bit, you spin its collar and the whole front comes off - and you can see your bit is right there. The button on top releases the bit for seamless maintenance. The only downside, each bit is specific to the driver; and they tend to run between 7-12 dollars. But, with all the screws from this project, there were not any signs of wearing. So for what it’s worth, you would probably want to keep a couple of these bits around, though they wouldn't need to be replaced terribly often.

Additionally, the belt clip on the Senco runs parallel to the handle, varying slightly from the tilted clip on the Dewalt motor. The hook is sturdy and can be switched from one side to the other, but the team found they preferred the tilt of the DeWalt overall.

Long story short, this was a fantastic tool. They put approximately 500 screws in with it and were only at ¾ battery; showcasing the efficiency of the 3.0 Ah battery. Smooth operation made for an easy install.

Simpson’s Quik Drive attachment - paired with a Dewalt cordless motor - stood up to the challenges it was given too. The biggest disadvantage to this set-up was the overall length of the tool. When testing, the reviewers seemed to feel it required a lot more force to get a flush drive. This made it harder to be consistent, as the team got tired quicker from pushing harder.

PRO-TIP: It helps to keep your hand on top, and DeWalt recommends using it to get more force.

In terms of depth of drive, there is a knob on the top of the attachment that you push forward and spin to change the depth. Not quite as simple as the Senco DuraSpin, but it works just fine.

Another pain point with the Quik Drive system was jam clearance. While the jams that did occur were due to limited user experience, they would push a little and it wouldn’t go all the way in - triggering a repeat action and creating a jam. Once jammed, the team did struggle to clear the feed with the Quik Drive; an issue that was not experienced on the Senco system.

To clear a jam, the team would have to remove the side of the Quik Drive, remove it with a pair of pliers, and put it back together. Zach also notes that the whole system is made out of plastic, and he worries that “with a lot of extended use that could be a problem” (with its durability).

On a more positive note, the team did enjoy the ability to adjust the angle of the Quik Drive, by rotating the attachment to any angle you want. It simply snaps back to that angle, which is useful for tight quarters.

Ultimately, the crew liked both systems, but they found themselves reaching for Senco most often, stating “it’s just a very smooth, easy-to-use gun. [...] It was more consistent and just ergonomically it worked a little bit better for [the team].” Overall, both were great tools and maximized efficiency for the Rescue Rebuild team, allowing them to move on to the next project all the quicker.

For more information on Greater Good Charities or to make a donation, visit Rescue Rebuild here. 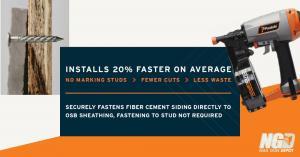 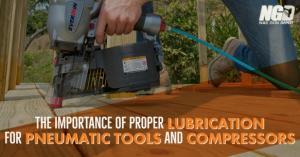